Biography – Arthur P. Haag, Chairman of the Board & Neutrex Founder 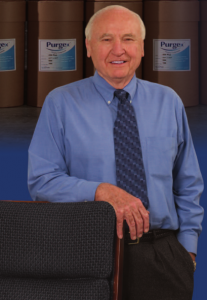 Education & Certifications
In 1951, Arthur Haag received a B.S. in Chemical Engineering from the University of Wisconsin at Madison.  Mr. Haag is licensed as a Professional Chemical Engineer in California and Ohio, where he lived before moving to Texas in the late 1970s.

Patents
Mr. Haag is the recipient of five United States patents, including a process patent for manufacturing titanium trichloride (TiCl3).

Professional Experience
Arthur Haag began his engineering and business career as a process engineer at the Wisconsin Steel Works in 1951 before serving in the United States Marine Corps during the Korean War.

In the mid-1960s, Mr. Haag founded PureChem, a specialty chemical company to manufacture catalysts for the production of polypropylene.  After he sold PureChem, he served for almost two decades as the President of the Catalyst Division of Dart Industries and later, the President of the Catalyst Resources subsidiary of Phillips Petroleum.  In those positions, Mr. Haag ran both Aztec Chemicals in Elyria, Ohio, and PureChem in Houston, Texas. Mr. Haag retired from Phillips in 1986.

Starting with small experiments in his home kitchen, Mr. Haag used his chemical background to develop a product aimed at assisting plastic processors. Continuous tweaking to his formula and promising results led Mr. Haag to outgrow his kitchen laboratory and start more advanced testing.  In 1992, Arthur Haag invented Purgex™ purging compounds, and he founded his most successful venture, Neutrex, Inc., where he served as President until 2021. He remains highly involved with Neutrex in his capacity as Chairman.

With a vast distribution network set up across the globe, getting the Purgex™ you need is easier than you might think.